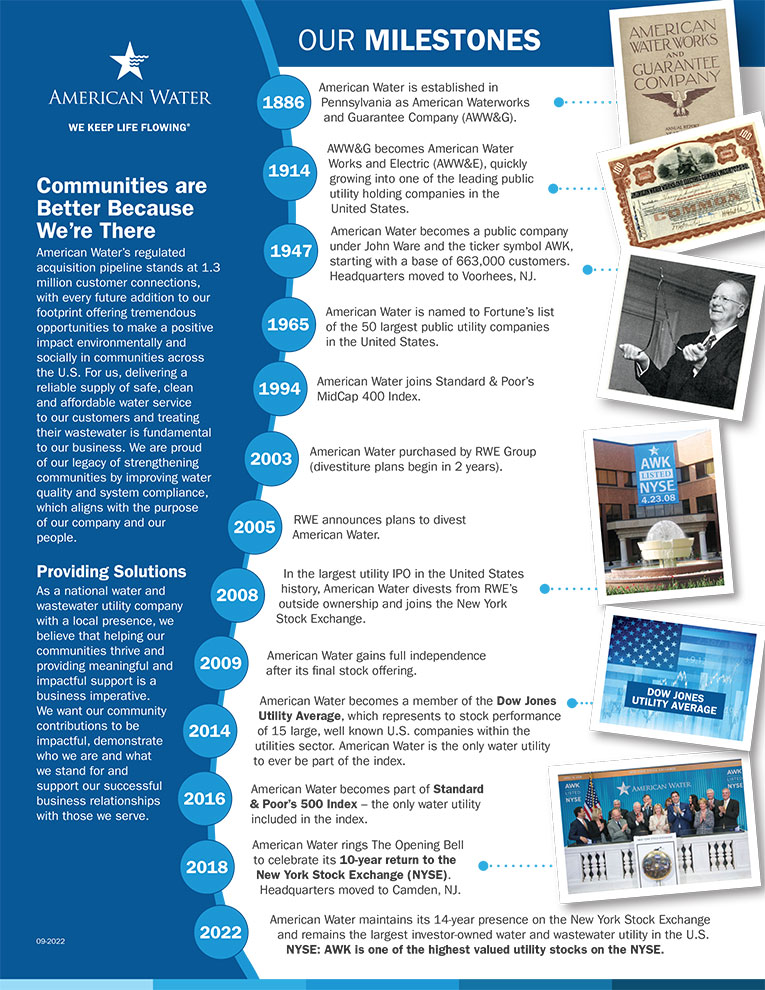 The people of American Water have centuries of combined experience in the water and wastewater industry. The team includes world-renowned researchers who are on the leading edge of scientific study and environmental protection, people who have been with us not only decades, but also for generations, and those who are passionate about environmental stewardship and care. Our crew members and plant operators get up each day with one goal in mind - to make sure American Water provides the best possible water service to our customers. We're a company with a track record of financial success, environmental compliance, successful partnerships, and commitment to our customers. We are customer and community focused, forward thinking and performance driven.

Our beginnings were humble, and the company's origins can be traced to the local water utilities of the post-civil war era. A small group of entrepreneurs and innovators spurred the nation's industrial development by bringing a critical commodity - pure, abundant water - to towns and cities across the land. In the years that followed, American Water grew and grew as smaller systems were purchased. Our service footprint now stretches across the country.

Today, our hard-working teams proudly serve approximately 14 million people in 24 states. We work hard each and every day to supply our customers with something they cannot live without - high-quality water and water service. We are scientists, innovators and stewards of the environment.

We are American Water. We Keep Life Flowing.

AWW&G becomes American Water Works and Electric (AWW&E), quickly growing into one of the leading public utility holding companies in the United States.

American Water becomes a public company under John Ware and the ticker symbol AWK, starting with a base of 663,000 customers. Headquarters moved to Voorhees, NJ.

American Water is named to Fortune’s list of the 50 largest public utility companies in the United States.

In the largest utility IPO in the United States history, American Water divests from RWE’s outside ownership and joins the New York Stock Exchange.

American Water becomes a member of the Dow Jones Utility Average, which represents to stock performance of 15 large, well known U.S. companies within the utilities sector. American Water is the only water utility to ever be part of the index.

American Water becomes part of Standard & Poor’s 500 Index – the only water utility included in the index.

American Water maintains its 14-year presence on the New York Stock Exchange and remains the largest investor-owned water and wastewater utility in the U.S. NYSE: AWK is one of the highest valued utility stocks on the NYSE.